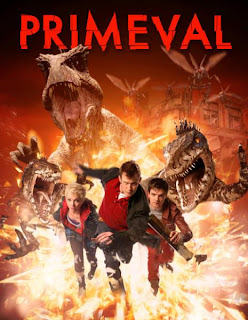 First...wow it has been a long time since I posted anything...I will need to go back and update on how the kids did with Castles and then Pathfinder...

The kids did move on though to Marvel Heroic...it was good BUT I think what happened is what I feared that the social impact of the game is tougher on the younger kids then adults...they don't have the social skills developed yet to pull it off.  Though the jury is still out.

I am in a huge Doctor Who mood and this has led me to Primeval...what you say?  Well I have been home sick the last two days and I have had a chance to watch the first series of Primeval.  Now it wasn't great BUT I could see the potential there.  This led me to find that there is a series called Primeval New World running on Canada's Space Channel...and this, this now is well done and reminds me of Stargate when that was fresh and new.

Kids like dinosaurs and heck so do I...so I might need to put something together for the kids over the break, we shall see.  I have scheduled one day for us to spend like eight hours together over the break on one day so that might be a fun day to try this out then.

Ok...like I said been sick and now I am just tired so I will be catching up with you all later and I will be better about writing again!!