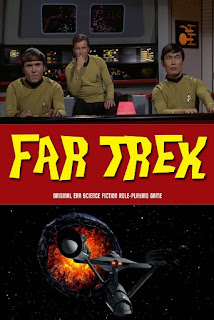 Wow...been a long time but I am excited to post about...well you guessed it, Far Trek.  Far Trek is a very rules lite RPG about, you guessed it Star Trek!

Now I know that Modiphius has put out their Star Trek game and it is REALLY good but it is not rules lite....

We are centering the story around the U.S.S. Yorktown and her crew...in this, my universe, it is 2269 and the Yorktown has a new captain a female captain, Bonnie McCallister.  Now this is an NPC and her X.O. is one of my sons, he is playing Commander Noah Lattrell who is coming with his own baggage, a daughter he is raising by himself, not on ship but with the help of his brother and his wife.  We also have Lieutenant Aiden Rush, Chief Helmsman and top notch pilot.  Aiden and Commander Lattrell have served together before and have the beginnings of a friendship.  Aiden is also one of the few "Earthers" that a Klingon House respects and that has something to do with a medal that he wears and a Klingon Sash that comes out for dress occasions.  Last we have Lieutenant Junior Grade T'Prall...a Vulcan physician assigned to the Yorktown.  T'Prall is a graduate of the Vulcan Science Academy and Starfleet...she is dedicated to her Vulcan teachings BUT she also wants to have the experiences that another of her family had almost 100 years ago while she served on the NX-Enterprise, T'Pol.

Well that is our beginning, we have one mission in and I will write about that here soon, promise.