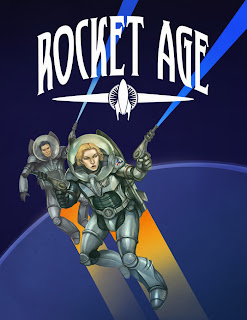 Ok so was thinking about Doctor Who and the "Vortex" system they use and remembered a book I had picked up in November called....Rocket Age!

Now this is Sci fi in the Retro Age, we are talking about 1938 here with the divergent history taking place starting in 1931 with Einstein, Tesla and Armstrong going to Mars.  Goddard should have gone but became ill before the launch...

Now their arrival on Mars and finding Martians there changes everything because there is tech there that is slightly better than what we have BUT with those two great minds there they figure things out pretty darn fast.

The Vortex system is the same system used in Doctor Who and in Primeval so if you are familiar with those then you are good to go for RA.  There are some new traits obviously but that's ok the ones that were added are actually kind of cool.

I am looking forward taking it out for a test ride here real soon!!
Posted by Rhonin84 at 5:32 PM