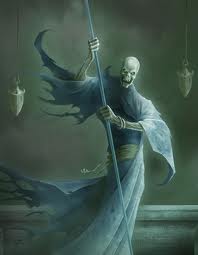 This Sunday saw two of the original characters die...one I thought might happen the second was a surprise.  The first to fall was our Cleric who came up short while battling a human mage.  The mage was hired as part of group of bad guys who we have had our way with for quite a long time...well they slapped back.  I was the GM for this and I really played this one up, the group was doing their now normal investigating and became separated the Cleric and Cleric/Thief ended up together and I won't go into details BUT the Cleric ended up with a Flaming Sphere sitting on top of his chest, roast Cleric it was.

Later as the group was licking it's wounds the Revenant that had been hunting the Nightstalker finally caught up with them.  Even with and Undead Bane sword the Revenant accomplished the task of killing it's murderer.  That now left only the Half-Elf Ranger, the Minotaur and my Elf Magus as the originals who have declared war on these very evil men.  Next time we get together I am looking forward to getting even with these bastards!
Posted by Rhonin84 at 6:52 PM