Taming of the Stag Lord... 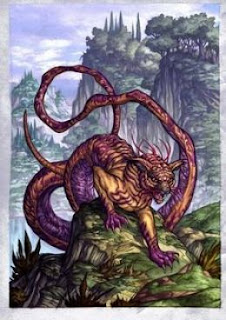 The 12 year old group continued today and once again the Tatzelwurm made an appearance...the mate of the one they killed last week. While crossing a river the last member of the group to cross spotted something shining stuck on some rocks just a little further down stream...well he went to investigate by himself...

The wurm jumped from the shoreline and nearly had him, the fight was difficult BUT the group managed to fend off and finally kill the wurm.  Some nasty sprites and avoiding combat with an Owlbear AND a Shambling Mound the party didn't lose anyone and actually managed to find some of the bandits and that was a nasty fight leaving two of the group down.  (The Marksman and Spellsword)

Finally making it home they are starting to get some gold and are making friends now with the farmers in the area...one of the daughters has taken a shine to Alexius and the Spellsword thinks he has found someone with some talent that maybe he can teach.  The kids are only first level but they are playing WAY above their heads and it's great!!

Nothing next week but we are back with a vengeance on the 19th!
Posted by Rhonin84 at 4:55 PM