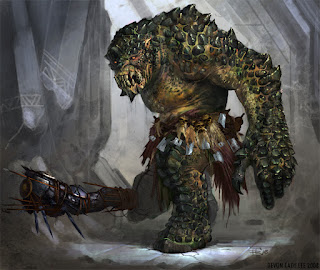 Oh the Desert Troll struck and struck hard yesterday...I used the troll as is out of the manual and though my dice have been luke warm yesterday they were smoking!  The scout of the group realized what the beast was and retreated on horseback, loosing an arrow off at it, the warrior of the group dismounted from her camel and proceeded to engage....oops.

The few rounds that the group tried to do some damage to it did nothing but irritate the troll and within three rounds two of the group were down and it was looking dim.  The scout tried to get the group to flee but to no avail really and when the SECOND troll started to arrive the scout turned tail and fled, only stopping long enough to scoop up the pup of a wolf cub that the dead druid was no longer going to be in need of.  The kids took it in stride and the scout did manage to get away...after all the trolls had enough food to keep them full!

Next week we pick up in the port town of New Haven and the beginning of a new story with the scout sticking around as the core of the next group.
Posted by Rhonin84 at 7:32 AM