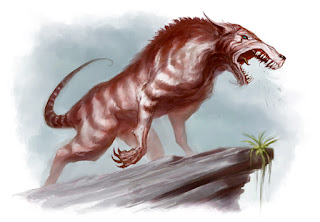 Today the heroes decided to try and track the bandits...this worked for the first day but by the second they had lost the trail and were going to give it one more day....but that night a lone Thylacine attacked during the night when they only had one watcher watching.  Everyone but the Spellsword woke and when it was over the creature was dead and Lasheer the Elvish Warden was unconscious.

Heading back to the village they learned that his arm was in bad shape (we are still using the negative effects table) and needed a more expert observation.  One of the party rode to the town and retrieved a cleric who diagnosed him with torn muscles and he lost the use of his right arm. The player decided to retire the character and bring forth his cousin an Elvish Marksman...maybe someday they could afford to pay for his arm to be repaired.

The new group went out and almost in the same place were attacked by a Tatzelwurm, this time the Spellsword was paralyzed and Alexius the gladiator gave chase, the new Marksman and Bard tried to pepper it with arrows before they lost sight of it.  The assassin woke up and followed along, finally they tracked the wurm to it's lair and a battle ensued.  It ended with the assassin using a torch and burying it in the eye of the creature...

Quickly gathering up their companions they made a quick camp until morning and then headed back to the village.  They had recovered a potion and two gems...plus a small amount of gold.

Next week they want to go back and see if they can scavenge the scales from the wurm... ;)