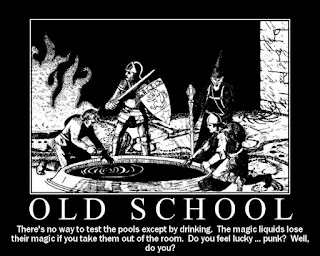 Old School Gaming...I remember reading this a few years back and thinking really what is the difference...and then I started teaching my kids how to play, and it hit me, there is a difference.  The kids started playing Pathfinder with me...and we were having a good time until one moment while in a dungeon I had built I realized that I was depending on the kids dice rolls to tell me if they perceived something...not on their actions.  They were not figuring out how to approach a trap but just rolling and looking up and wanting to know was the roll good enough....ARGH!

Finally we started playing some good old Holmes with some Mentzer thrown in and then recently ACKS was released from Autrach and the fire caught with both groups of kids that I run.  Now it has been a bit of time...my older teens have started catching on and they have asked me to run them in Castles and Crusades...we'll see.

The younger kids pre-junior high, are still working ahead we might look at going back to just some basic Holmes with some house rules but we'll see.  I know this...I won't be starting a Pathfinder game anytime soon as a GM...I am enjoying not breaking my back carrying the rulebooks.