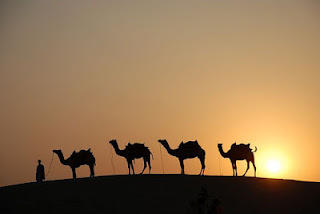 Wow spring break gave us a rest and last we saw our little group they had defeated some giant lizards and run away from stirges...the Bladedancer was again at zero hitpoints and the thief was at one.  Nera the Bladedancer came around and they continued exploring, having used all their healing already.  Coming to a T-corridor they could see a statue at the end of one of the sections and moved that way, discovering two doors.  Choosing one they surprised six followers of Gorm AND a new PC who was planning on joining, though he was there looking for information on the lost caravan.  The group actually did a good job or role-playing the scene and avoiding the combat...even with their tattoo's from the Amazons.

Leaving the long lost temple with their new guide Valen Cross they actually found some camels, I ruled that these were lost from their caravan and were more than happy to be led.  The next day...I rolled an encounter and for a moment I thought about changing it...a troll.

Now I have told this group that this is an old school game and sometimes you have to PLAY smart, this is NOT a 3.x game where every encounter is balanced for them...the "Sand" Troll burst out of the sand that had originally looked like a rock, and I was shocked that the party was not surprised but the dice were in their favor...until next week.

This encounter could be a TPK IF they don't run...hopefully they will remember my advice....
Posted by Rhonin84 at 7:26 AM