The Lost Caravan (B4 Continued) 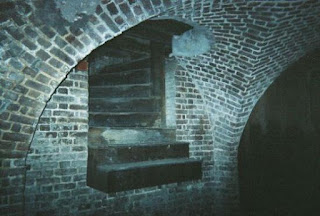 The party consisting of Kaley (Shaman), Brandy Greyshadow (Thief), Nera (Bladedancer), Rhilla (Elf Ranger) and Myrrin (Fighter/Mercenary) were coming to the rescue of Nera who had slipped off by herself at the end of the last session.  Nera had run afoul of a neanderthal man who was looking for a "mate", he had knocked her into negatives last week.  Rolling on my new death and dismemberment table we found that she was out only for a few rounds from a nasty bump on her head!

The battle now started as the man tried to escape with his prize Rhialla engaged with her bow and missed, Myrrin rushed forward and struck a blow, Kaley threw her spear and missed badly...using my rule that if you miss by 4 or more...yep she hit Nera driving her into negatives AGAIN...we rolled and she was going to lose the use of a limb and I said she needed to make a death save, she rolled a natural 20!  I ruled that with the natural 20 she now would not lose the use of the limb but would have one really nasty nasty scar.  Brandy had stayed back (1 hit point) and made sure the door to the shifty room would not close.

Now the next round came and went and the man decided it was time to cut his losses, throwing the unconscious Nera at Myrrin he tried to flee, Myrrin though was not phased and she cut him down as he tried to withdraw.  They quickly tended to Nera and started to return to the Warrior-Maidens, only to find a secret door they could not resist opening...to reveal some beetles, they closed the door.  Resting now at their "home" they heard that there were two women going scouting out in the ruins tomorrow.  (Now I decided that the ziggurat was part of a larger set of ruins, that of the city that was lost itself.)  Going out hunting, the shaman found two "healing herbs" in the shadows of the ruins, they quickly applied these to Nera.  Brandy had rested enough and was able to recover some of her hitpoints.  While in the ruins they saw men on horseback combing through the ruins.  (What the party didn't realize was that these were men looking for the lost caravan that they were part of.)  They returned to their room with the women.

Finally two days later they ventured back out to where the neanderthal man had died to find his partially eaten corpse and a set of stairs going up!  They went up and found a secret door with stirges, they were able to shut the door before any of the stirges escaped.  Moving on they found the room they almost died in at the beginning and then they found a room with a lizard, they engaged only to be surprised by the second.  The combat was drawn out and long with lots of misses but finally the lizards were down and so was Nera again... ;)  We called an end to the session there (90 minutes).

Some good stuff happened and the girl's had a blast with the session as well...we have our quote of the session.  "Choppy choppy...pointy pointy!"  It was a fun session for me as well!!
Posted by Rhonin84 at 7:26 PM