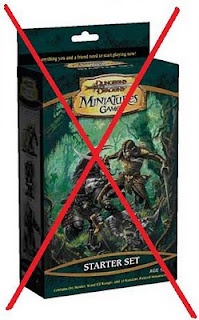 Alright I have thought about this and I understand the thought of no more mini's, counters are easier to transport and easier to make. The 3D representation on a mat or a board though really can't be beat...but WOTC also has decided to kill books. NOW this is a much more ominous sign as this could mean to signal the end of something or a very large change.

The DnD world changed in 2008 with the introduction of 4e, it was very much different than what we had experienced in the 3.x era, much less the two generations before that. In two years we got a "boiled" down version of the game in Essentials or 4.E, but now I get a sense there is another move, and if this becomes 5th edition...well I gave up Magic in the nineties I can give up another WOTC project.

Now I've been called a hater recently and I had to chuckle...I spend a lot on my hobby and I buy from my FLGS and I will continue, there are times I go around them, but not many. I run games online, I sponsor a club at the school I work at and I assist with the club my kids started at their school, I've been asked to help with the club at the local library. I am involved with the hobby!

Over the last break the kids, some five of them, were playing and after they were done, my wife commented, "Sounds to me like they don't make decisions other than to roll the d20 and see if they hit." I laughed and said..."Your right!" The decision making process had been taken out of the players hands. It was run from encounter to encounter any critical thinking had been ruled out of the game based upon the correct, Daily, Encounter and At-Will powers. Heck you didn't have to worry about healing or resting anymore just get through the encounter and you'll heal.

Now the next time we got together we did something different a very basic game that had the kids thinking about how to avoid traps, and how to get around the dungeon...heck the comment was even made, "Do we want to leave a closed door between us and the entrance?" I smiled and was proud of my little new DnD players. The ages for this group are, 10, 10, 10, 7, 7 and sometimes a 6 year old.
Posted by Rhonin84 at 7:17 PM